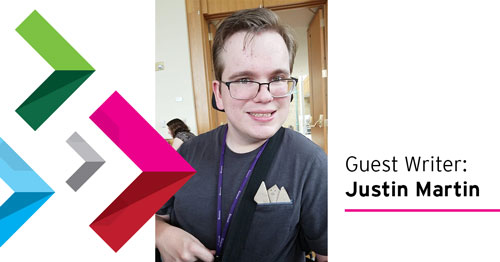 The America I grew up in was no place for a kid in a wheelchair, and it never let me forget this; I’d smell the inside of a bakery I could never actually enter, or else I’d read Wikipedia summaries of the newest comics I couldn’t buy from a comic-book store that still had no ramp, despite my repeated emails. It was visually obvious – and literally true – that both my neighborhood and the nation that contained it were not built for me.

2002’s Help America Vote Act – or HAVA – is the primary law that ensures the electoral process is accessible to people with disabilities. It’s through HAVA that Disability Rights Ohio – along with other protection and advocacy organizations in each state – has the money to connect us with the resources we need to vote privately and confidentially. But HAVA’s disability rights protections come across as a historical footnote: the act was passed primarily to reform ballot procedures in Florida, which famously were so confusing that the results of the 2000 Presidential election had to be resolved in the Supreme Court. In other words, the disabled right to vote was never secured with its own legislation – it was secured as part of a package deal that only became a priority when enough able-bodied Floridians felt their voting rights were being restricted.

What was literally true about the bakeries and the comic shop is also figuratively true about the ballot box and the wider political system: for far too long, no one like me had an entrance, and far too few able-bodied people cared. I am never certain entrances will come; when they do, they come too late, and they feel like accidents.

A white woman’s right to vote was not guaranteed until 1920. A black person’s right to vote wasn’t guaranteed until 1965 and has been under attack in ways both subtle and obvious ever since. A disabled person’s right to vote was not guaranteed in practice until 2002, and had things gone more smoothly in Florida, it may have remained unsecured even today.
So every conscientious person with a disability has to ask themselves a question: what does it mean to vote purposely in a country where it feels I was allowed to vote by accident? Or, put more pointedly, why should I remember to care about a country that has a habit of forgetting to care about me? Why should I vote?

Every person with a disability is going to have their own answer to this question; all that follows is mine.

‘They cannot ignore our votes’

I dropped out of my first political science class halfway through my freshman year of college. I understood the reading fine – the differences between Athens and Sparta, John Stuart Mill’s fear of political majorities – and I even liked the slightly stuffy professor. The problem was that every other student in the class spoke about hypothetical themes: are people, hypothetically, good or bad? Should their governments, hypothetically, be big or small?

To a disabled person like me – someone whose dreams depend, in part, on whether Medicaid will pay for a wheelchair, whether an independent provider can be found to shower me – these entertaining political hypotheticals have never been entertaining, never hypothetical.

“Do people care about me?” is a spiritual question for many people, as it is for me. But become disabled, and the question takes on a second dimension, a practical one: the difference between having dinner and not having dinner, going to the bathroom and not being able to.

History tells us that, too often, the answer is no. Curb cuts were not commonplace in this country until the disability rights group ADAPT bombed inaccessible sidewalks to make their own curb cuts. Section 504 of the Rehabilitation Act of 1974, which helps people with disabilities get jobs and an education, was not actually signed until 1977, ignored by the Department of Health, Education and Welfare under multiple presidents until a group of disabled citizens occupied the HEW offices.

These events have changed the world for the better, but some things have not changed: political realities that alter our lives immeasurably might feel like sports to our neighbors and our elected officials. They may look at us sympathetically, yet only fight for us pathetically. If we are disabled, they may ignore our concerns, our phone calls, our emails, and our moral high-grounds.

I’ve heard people say that citizens vote in order to push the country towards their vision of the future. This is only partly true, and it is usually said by those people who’ve never had any reason to know better.

If you have questions about voting or feel that your voting rights are being violated because of your disability, contact Disability Rights Ohio. You can also find more information on the Voting page of DRO’s Self-Advocacy Resource Center and on the Ohio Secretary of State’s MyOhioVote page.

Justin Martin is a writer, a 6-8th grade counselor at the Thurber House in Columbus, Ohio, and a senior English major at Kenyon College in Gambier, Ohio. Shortly, he’ll be a high school teacher, and God willing, write comic books. He can be reached on Twitter @jmartinwrites, and by email at justinmartinwrites@gmail.com.