A guardianship usually starts because someone thinks another person is unsafe or unhealthy and can’t make their own decisions. They tell the probate court that person needs help, and someone asks to be assigned as the guardian.

A guardian is a person that makes decisions for another person. People with guardians are called “wards.”

Disability Rights Ohio gets a lot of phone calls from people who have guardians. Some of the most common complaints happen when guardians don’t give wards enough independence. A guardian is supposed to make decisions in a ward’s “best interests,” and that has two main parts that can be tricky to balance. First, guardians are supposed to keep the ward safe and healthy. Second, they’re supposed to give the ward as much independence as they can handle, and let the ward live as normal of a life as they can. It can look something like this:

Problems can happen if the scale goes too far in either direction. For example, a guardian could be too focused on keeping a ward safe, and, as a result, they don’t let the ward do things on their own or learn how to be more independent. The ward can start to feel like they’re trapped and can’t live the life they want: 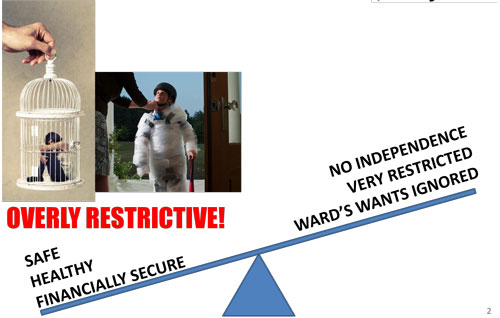 Every person is different. Some wards will be able to do big things themselves, while other wards can only do little things themselves. Either way, a guardian should always be willing to help a ward grow and become more independent. If a ward wants to learn how to do more things on their own, they should ask their guardian to sit down with them and talk about their independence.

A ward can still work on their independence, even when they still have a guardian. Here are some ideas:

If a ward gets better at handling things themselves, they might even get to the point where they don’t need a guardian. Here are two common ways that a guardianship could end:

If you are a guardian, talk to your ward and ask if there’s something they want to try doing on their own—then help them to do it! If you are a ward, talk to your guardian and ask them to help you become more independent.

In addition to as much independence as they can handle, wards have other rights, too. You can learn more about wards’ rights in our new publication about guardianship from Disability Rights Ohio:

If you have more questions about your rights, you can always contact us!