In this Everyone Deserves Care story, we hear from Maria Matzik. Maria has not only utilized home and community based services her entire life – she’s helped shape the way the programs work though legislative advocacy. In this piece, Maria gives us a first-person look into the history of Medicaid funded waivers, with an emphasis on the importance of consumer-controlled care, and shares how these services are essential to living full lives.

Here is my Medicaid Story, in a nutshell:

My name is Maria Matzik, and I am a consumer of the Ohio Home Care Waiver program—a Medicaid funded program. I have Spinal Muscular Atrophy Type II; I use the assistance of a ventilator and I have a tracheostomy. For mobility, I use a reclining motorized wheelchair. I chose the option of Home and Community Based Services instead of the state’s segregated, abusive, and expensive disposition to institutionalization.

I have used the Independent Provider Type since 1999. I was one of the few individuals who advocated for this option back in the mid-90s after going to Washington D.C. and speaking with many senators and representatives. My partner of 27 years and I worked on the rules for the Ohio Independent Provider program the entire time, from 1995 until implementation in 1998.

We also worked with many other states, CMS, and advocates to obtain the best program that Ohio would allow. It was a fight and definitely not everything that we hoped for, but it was a better option for most of us than home care agencies.

The Ohio Department of Medicaid (ODM) (at the time, called the Ohio Department of Health and Human Services) threatened us by saying that if we did not accept their proposed rules that we would not receive any program. Many of us were rightfully outraged. During the Ohio Joint Committee on Agency Rule Review (JCARR) hearings, the room was packed with standing room only. I testified in protest of their proposed rules and threats. I served them with a LARGE jar of Vaseline on top of a copy of their rules. This made enough of a statement to force the committee to reassess and come up with something that everyone could agree on.

We also advocated for and participated in, the process to write and pass the statute for the Ohio Medicaid Waiver Home Care Attendant Provider Type. I was the only individual who testified for this.

My journey into advocacy began on the day of my college graduation when Ohio’s Job and Family Services threatened to throw me into a nursing home because the State did not offer the coverage I needed to “assure my health and safety”.

I had just completed a 4-year degree at Wright State University in 1995; I managed to juggle a full class schedule, student attendants (who were phenomenal non-licensed individuals), and agency nurses. The agencies were my nightmare, but 90% of the nurses were incredible. I was looking forward to graduation and beginning a new life here in Ohio, as I am originally from Pennsylvania. However, Ohio decided that I was not safe since I did not have two hours a day covered, and the best place for me, if I remained in Ohio, was a nursing home.

One agency, so I thought, was my savior. This agency agreed to cover me and “eat” the two hours. I later found out that the real heroes were the nurses themselves. The only reason the agency opted to “save me” was because two nurses working for me agreed to take a significant pay cut.

Though the old stereotypes still exist, I am here to tell you that people with disabilities can be productive citizens, taxpayers, parents, spouses, and even your employer given the options of appropriate services to achieve our maximum independence. In addition, I have a job, a wonderful partner, beautiful kitties, great friends, own an accessible home, own a wheelchair accessible vehicle, and pay taxes.

Medicaid Home and Community-Based Services (HCBS) waivers afford States the flexibility to develop and implement creative alternatives to placing Medicaid-eligible individuals in hospitals, nursing facilities or intermediate care facilities for persons with mental retardation. The HCBS waiver program recognizes that many individuals at risk of being placed in these facilities can be cared for in their homes and communities, preserving their independence and ties to family and friends at a cost no higher than that of institutional care.

I am writing this to not only share my story, but to inform you about a population that is almost always overlooked: individuals with disabilities aged 21 to 64. In most cases, these individuals do not have any family or spousal support. I am a part of this population and I diligently fight to ensure we all have equal opportunity to live a full and productive life. This is the population who desperately needs Medicaid and Medicaid Waiver services.

Many years ago, a large group of consumers, parents, and advocates began a long battle with the state of Ohio to create a home care program that not only provided the services that an individual needed to remain in the community, but one that offered consumer choice—the most important aspect being consumer control. We have come a long way in the past two decades and gained many positive changes that should be recognized, but we have also faced some recent setbacks and have far to go to achieve the “choice” and “control” we advocated for over 20 years ago.

When we started this advocacy effort the progress was slow and frustrating because the Bureaucrats could not grasp what it was that we were asking for. It was next to impossible to engage in any form of dialogue even though we were the population who would be impacted the most by their decisions. We were lucky if they even took the time to return one of our phone calls. The sense was very clear that they believed that they knew what was best for us and did not feel the need to include us in creating this new program. Finally, a statewide effort was made to involve representatives from our regional The Health Care Finance Administration (HCFA office), which is now Centers for Medicare and Medicaid Services (CMS). The tide began to turn when the requests that we had made for things like “choice” and “control” were validated by HCFA. Focus groups were created and plans were set into motion. Then, time moves on and Waivers are born.

Many years passed and once the Medicaid-funded Waivers were put into place, there were not many dealings with the Bureau. Then, a new administration brought changes to the budget and proposed changes to the disability population once again. We made attempts to speak with our legislators (just as we do today) to no avail.

Most people view disability as an “illness” or a “condition.” But the reality is that it is just a natural part of life for most of us.

I don’t have to think about what my needs are because I know my needs just as you know yours.

The difference is that you perform your own tasks and I cannot. I must think about who will perform my tasks and how. I have always trained all my providers, both licensed and non-licensed. I have trained all my providers to do everything from moving me correctly to changing my tracheostomy. I have been hospitalized once in 1993 for respiratory failure caused by inappropriate ventilator settings by my doctor.

I have had the choice, I either go through what I have just described or go to bed on Friday night and still not be able to do several things mentioned above, like trach care, not be able to go anywhere, do anything and get depressed because I am not taking part in life. For me, this is a choice that I am willing to make because it is a “choice.” If we lose our Medicaid coverage or continue to have issues with hiring reliable and responsible home care providers we will have no choice! We will have no life!

People with disabilities are resilient individuals with a passion for life and a drive to succeed.

Most non-disabled individuals will never, and could never, endure the oppression, segregation, discrimination, humiliation, ignorance and pain that individuals with disabilities face throughout their entire lives. We are constantly having to prove our worth and value to a society that only values wealth, beauty and success. It is time that society, and even some of our best intended advocates, stop trying to paint a picture by using our inabilities and our financial drain on society and the budget. It is time to fight like our life is in danger because it is!

Remember: The Disability Culture is the only culture that anyone can enter at any time. 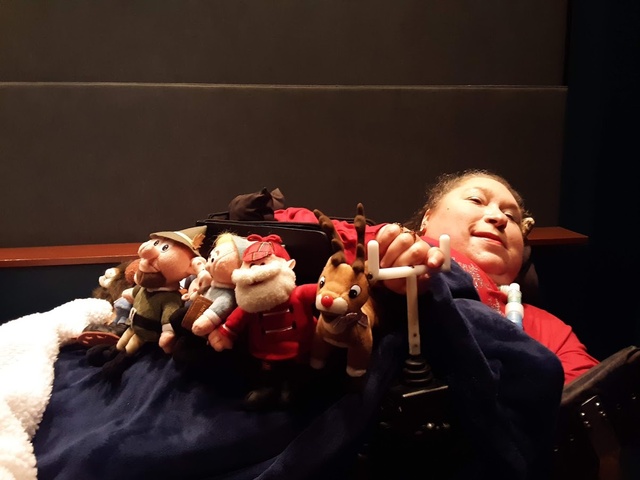 Photo ID: Maria Matzik is shown in her reclining wheelchair wearing a red shirt. She is smiling. On the front of her wheelchair there are Christmas themed stuffed plushies - all characters from the "Rudolph the Rednosed Reindeer" movie - the Head Elf, Hermey the Elf, Santa, and Rudolph.

If you would like to share your story for this series, please fill out this survey https://www.surveymonkey.com/r/EDC-ShareYourStory.