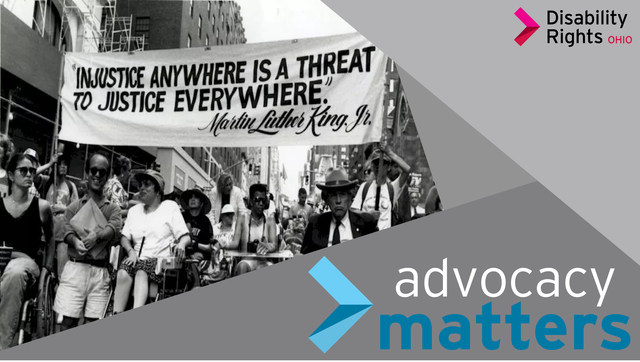 At Disability Rights Ohio, our vision is to create a society where all members are equal participants: where members of any minority enjoy the same rights as the majority. We recognize the impact of generations of oppression and systemic injustice in our work. From students of color who are more often bullied, restrained, or even tased by school resource officers for their disability needs to the disproportionate representation in our jails and prisons of people with psychiatric disabilities and people of color.

Throughout our long history, our work often intersects with the fight against systemic racism. We pledge to do more, to work where the paths of race and disability cross.

In 2015, after investigating taser abuse in the Franklin County jail system, DRO found that jail staff excessively tased large numbers of inmates with physical and mental disabilities. When the county approved our settlement, they implemented new training and guidelines to stop the abusive use of tasers within the jails. Those changes dropped taser usage from 70+ incidents annually to only 5 incidents a year.

Battle for Inclusion in Education

Our research showed that schools with higher levels of segregation had worse academic outcomes than those with less segregation, especially when considering 11 of Ohio's large urban school districts. Poor outcomes disproportionately impact students of color who represent over 60% of the students in Ohio’s large urban school districts. After our class-action lawsuit, the Ohio Department of Education committed to improving support for special education throughout Ohio, developing measurable improvements in student performance and inclusion, especially for children with disabilities in these 11 districts.

As Medicaid cuts threatened healthcare coverage for thousands of Ohioans with disabilities, protesters converged on Senator Rob Portman's Columbus office to seek change. The Columbus Police Department (CPD) forcibly removed many protesters—in some instances separating people from their wheelchairs to arrest and jail them. We documented countless injuries demonstrators suffered at the hands of CPD. After DRO’s thorough investigation and advocacy, CPD agreed to change their transport and accessibility policies.

As Ohio’s designated Protection and Advocacy agency, our work clearly demonstrates that #AdvocacyMatters. But we cannot stop now. We support the protesters, and as the battle for equality continues, know that our organization will continue to stand proudly beside you … because #BlackLivesMatter.